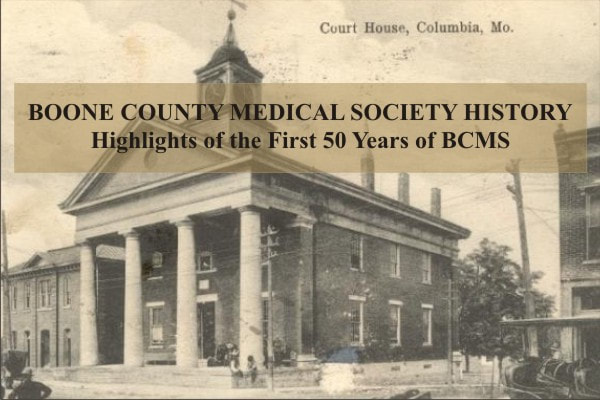 First order of business – electing Dr. J.L. Corlew, temporary Chairman and Dr. R.S. Austin, temporary Secretary. A committee of three was appointed by the Chairman to draft the Constitution and By-laws for the Society. Committee members were: Drs. W.A. McCallister, T.C. Richards and Woodson Moss. Membership dues were $1.00 per year and $2.00 to the state medical association.

Meetings are to be held in Circuit Court Room in Columbia and shall be all day meetings wherein medical papers are introduced and read. Determined that a janitor be paid $1.50 for the past four meetings and for the remainder of 1903 be paid $.25 for each meeting.

By April 1903 they remitted $54 to the state medical association for dues-27 members. Meetings were being held at Parker Memorial Hospital and dealt with cases in member’s clinics or at the hospital i.e. removal of a fibroid weighing 10 pounds; hypertrophy of the turbinated bones demonstration and removal of portion of bone, reviewed 20 cases of typhoid fever, discussed tuberculosis cases as well as various malignancies.

In late 1904 the Society began night meetings in different locations, Masonic Hall in Hallsville, Sturgeon, Centralia, etc. In October 1904 they had $.50 on hand after expenses.

1922: meetings were called to order in the evening at Boone County Hospital.

In December 1933 the executive committee was called to investigate on proposed medical, dental and nursing care of the indigent sick to be instituted by the Federal Emergency Relief Administration. Prior to February 1937 all minutes were handwritten by the Secretary of the Society. By then evening dinner meetings were being held in the Tiger Hotel.

1938: the Society secretary read a report of the Woman’s Auxiliary to the Boone County Medical Society by its president that outlined the accomplishments of the society through the year in an excellent fashion. The secretary called attention to the unusual nature of such a report, in that at no time, during the tenure of the Society had any written report from the Woman’s Auxiliary been received. Also in 1938, the American Medical Association had a survey they were doing on the needs and supply of medical care that they wished each member to complete. The survey was so important to organized medicine that they urged each member to be as careful as possible when completing such. In 1938 you see more mention of the Missouri State Medical Association and more references to legislative bills.

1941: the Medical Society was to present available doctors for civilian care and for military use, should the need arise. A Committee was formed to prepare this list of physicians under 55 and over 55. Final report sated “Due to the fact that the proportion of men already in service from the county is high and due to the fact that the majority of men over 55 are out of practice or disabled, it was agreed to send the list asked for, together with additional information: Men needed and engaged in teaching at the University of Missouri, Stephens and Christian Colleges; men at the Cancer Hospital and Boone County Hospital; men carried as doctors in Boone County who are retired or incapacitated at present; and in the recommendation of men needed to care for civilians and teaching needs. The secretary was instructed to make such a report AND TO STATE THAT AT PRESENT THEY ARE ALL NEEDED HERE.

1942: the Medical Society discussed waiving yearly dues of all members who are in the service for the duration of their service in the armed forces during the present war. They waived 18 members’ dues. Several discussions of civilian defense and general health programs.

1946: the Society looked into reorganizing the Central Missouri Clinical Society so that physicians from outside Boone County could participate in the society under just one name coming together for the purposes of promoting acquaintanceship between physicians and affording means and insuring a larger physician base for activities and participation.

1946: Special Meeting of BCMS was called. A physician reported that he was having trouble getting his patients into Boone County Hospital due to a lack of empty beds. He reported that 51 beds at University Hospital went unused all last year. A Committee was appointed to work on establishment of additional hospital beds and facilities in Columbia and to contact the Board of Curators at the University and request them to reconsider their action closing the University Hospital to private patients so long as not inconsistent with proper service to university students and crippled children. This issue was on the agenda for months.

1947: The Society has been meeting in McAllester Hall and they were informed that the University prohibits smoking in its buildings so use of the Hall by the Society would depend upon adherence to this ruling. There will be no smoking at future meetings by members and guests of the Society.

Apparently a patient from New Bloomfield, suffering from an acute attack of polio-myelitis, was denied admission on an emergency basis to University Hospital. Callaway County Medical Society has asked BCMS to help them investigate this situation and to see what arrangements polio patients in near-by rural districts can receive emergency care. The answer to this situation came: “First priority outside of students went to wives and families of students, and faculty and then emergency cases can be admitted. The Acting Administrator of Missouri University is to consult with the Director of Hospitals, the Chief of Staff and other medical officials when necessary but he is solely responsible for carrying out the directives concerning admissions. In cases of dire emergency presenting at the hospitals for use of special facilities available only in the hospital or necessary to avoid imminent death will be handled on an emergency basis, other rules restricting admissions notwithstanding.”

1948: The Cancer Committee met many times to discuss working with a citizens group interested in cancer education including the Society physicians presenting cancer informative talks and slides on a voluntary basis. The Society assisted with establishment of a blood bank staffed in part by American Red Cross equipment and personal.